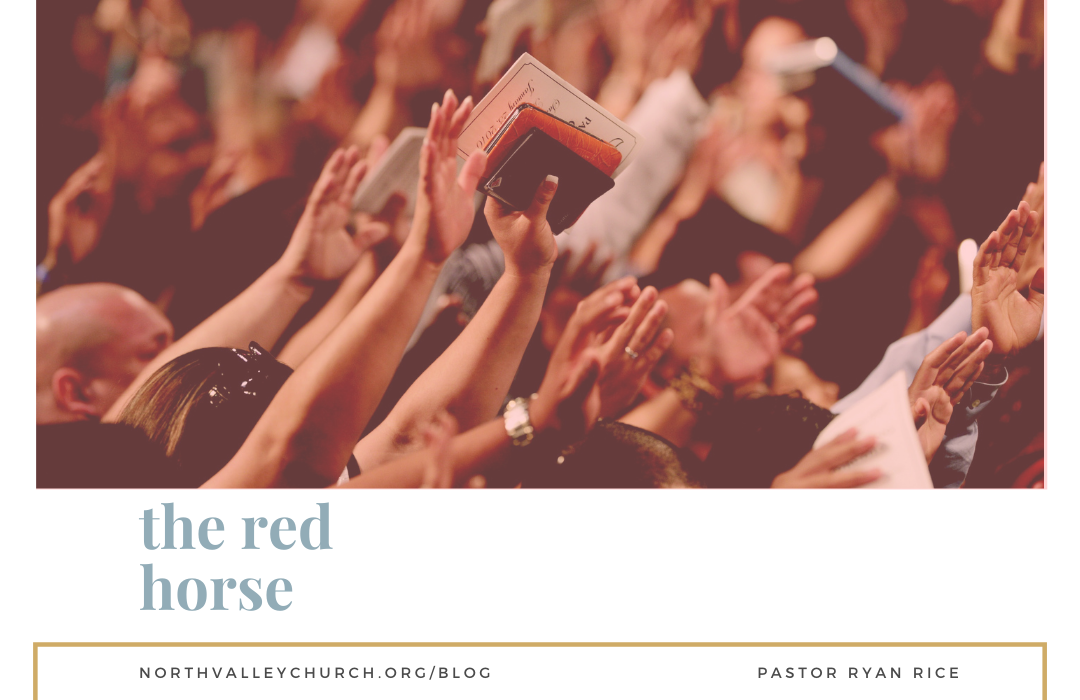 And out came another horse, bright red. Its rider was permitted to take peace from the earth, so that people should slay one another, and he was given a great sword.

In this scene, there is a force of evil that rides into the world to spill blood.  Jesus gave a prophetic description of a world war, saying nations will rise against nations. This will be unparalleled to anything we have ever seen before (Matthew 24:6–7). Not only will there be countries waring against each other but families in these dark days will turn on each other as well. As Jesus stated…“Brother will deliver brother over to death, and the father his child, and children will rise against parents and have them put to death. (Matthew 10:21)

This bloodshed will echo and amplify that of which we find in the book of Genesis when Cain rose against Abel and killed his brother out of anger. (Genesis 4:8) A new level of evil and anger will sweep through our streets in this coming tribulation.

The worldwide peace that the Anti Christ initially created will be gone at this point. The Red Horse here symbolizes the bloodshed and destruction that will occur on a global scale.  Dr. Wiersbe, a bible commentator noted, “Red is a color associated with terror and carnage. In Revelation we have the red horse of war (6:3–4), the red dragon (12:3), and the red beast.” (17:3)

Additionally, it should be noted that the word “great sword” refers to a roman sword called a “Machaira”  it was worn on the belt of a Roman soldier and used for capital punishment. It as well was used to describe the weapon that was used by assassins.

The scene portrays the image of mass bloodshed. From civilian to military casualties. The violence we see in our world today is only a foreshadowing of the war and tribulation that is to come. There will be an unprecedented unleashing of killing and violence across the world. Mass shootings, riots in the streets, homes, and hospitals all set ablaze. Both cities and countrysides will burn with fires like never seen before.  Scores of innocent people will die, millions murdered and killed by nuclear attacks civil wars will break out, military invasions from other countries will be a constant and continual blood bath for the world.  In the world history of wars, we often think of the largest wars we likely recall the World Wars. In WW I (1914-18) an estimated 20-37 million people were killed. In WW II (1939-45) roughly 56-80 million people were killed.

According to the New York Times, At least 108 million people were killed in wars in the twentieth century.  They went on to report that the total estimate of all those killed in wars throughout all of the human history range from 150 million to perhaps up to 1 billion.

While as devastating as this all is, what those left behind after the rapture will face in the tribulation will be far worse! With the increased threats of terrorism nuclear wars and weapons of mass destruction, the stage is already set for a worldwide holocaust and end times Armageddon.  What’s tragically terrifying is to consider is that if the highest causality estimate is 1 billion over the course of all of human history, the tribulation period will be well over 1 billion in just a 7 year period of time!!!

In light of seeing the coming mass destruction on our world. It’s incredibly sobering and sad. Yet, we know as believers we will be raptured. We will be rescued. Saved from the suffering. This ought to cultivate a heart of praise. For we as believers will not be suffering but singing. From every tongue, tribe, and nation, praise will be all around the throne room of God.