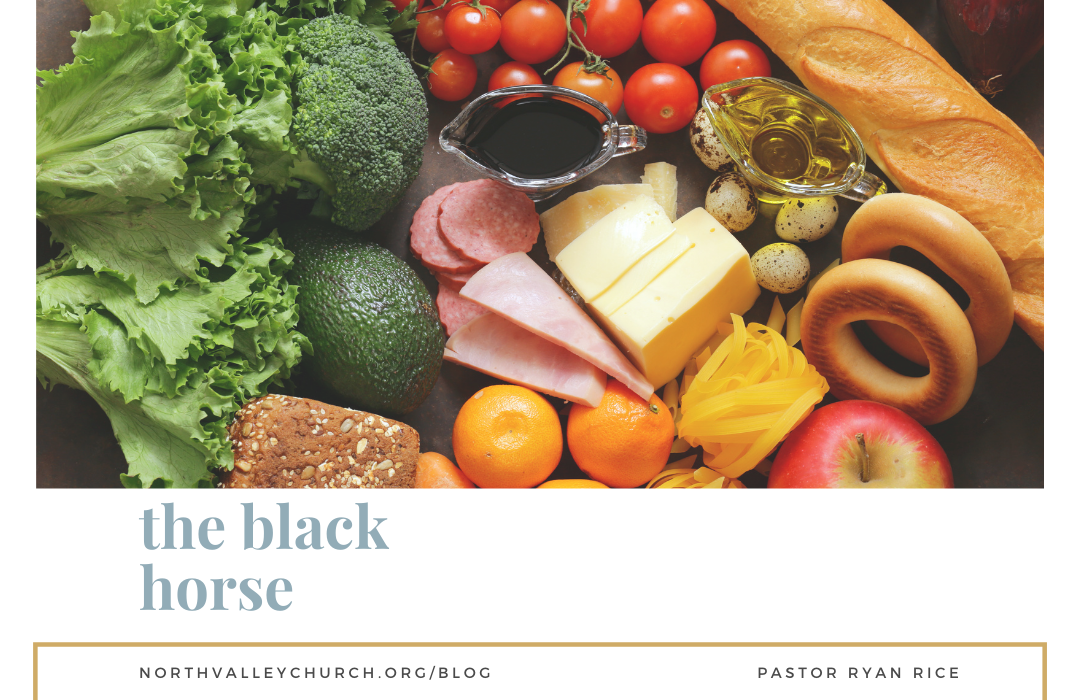 I looked, and behold, a black horse! And its rider had a pair of scales in his hand. And I heard what seemed to be a voice in the midst of the four living creatures, saying, “A quart of wheat for a denarius, and three quarts of barley for a denarius...

In the blockbuster movie, Hunger Games, Katniss Everdeen has to fight her way to survive and provide food for her family and friends. In the days of the tribulation, there will be an eerily similar experience.

As we look at today’s passage, we discover a black horse, riding into the world’s future tribulation. This black horse is a symbol of famine which often follows war, inflation, crop failures from pestilence, floods, etc. (Matthew 24:7)

During the tribulation, this horse will appear after the wars have ravaged the lands, and could result in wiping out more people, with disease and epidemics than the actual casualties from the previous wars. It’s important to have a clear understanding of what a famine actually is.  Britannica dictionary provides a helpful definition…

Famines, are a severe and prolonged hunger in a substantial proportion of the population of a region or country, resulting in widespread and acute malnutrition and death by starvation and disease. Famines usually last for a limited time, ranging from a few months to a few years. They cannot continue indefinitely, if for no other reason than that the affected population would eventually be decimated.

The Apostle John described a famine where there is hyper-inflation of basic foods. In saying…“A quart of wheat for a denarius” would indicate there will be an astronomical price for staple foods. A denarius was a day's wages, and a quart of wheat would only be enough to maybe feed the person for one day! This skyrocketed pricing is nearly a 1,000% increase in the price of foods.

In an environment like this, many people will have to resort to less desirable foods or starve. Some will survive by being able to create a food sharing program with others or resorting to taking the mark of the beast, As scripture says… “no one can buy or sell unless he has the mark” (Revelation 13:17) Others may find ways to avoid the mark by living off the grid and pick up farming, hunting or fishing. Only if they are able to go undetected. Most families will not be able to hide from the coming persecution and governmental control. They will go hungry and starve.

In American culture today, we buy in large do not know this kind of hunger problem. The average American throws away enough food each day to feed a family of six in a third world country. We as well typically feed our dogs and cats higher qualities of protein than most people around the world are able to eat.

The United Nations Food and Agriculture Organization estimates that about 815 million people in the world are suffering from chronic malnourishment. These are people that go to bed hungry.  This isn’t the hunger we experience before we eat a meal, or even miss a meal, it’s the pain that’s felt when there is no meal to find for a week at times or even a month or more.

In light of this coming famine. We ought to have a new perspective. Give thanks to God that we don’t have to endure the pains of starvation. Giving thanks for your food ought to take on a whole new meaning.