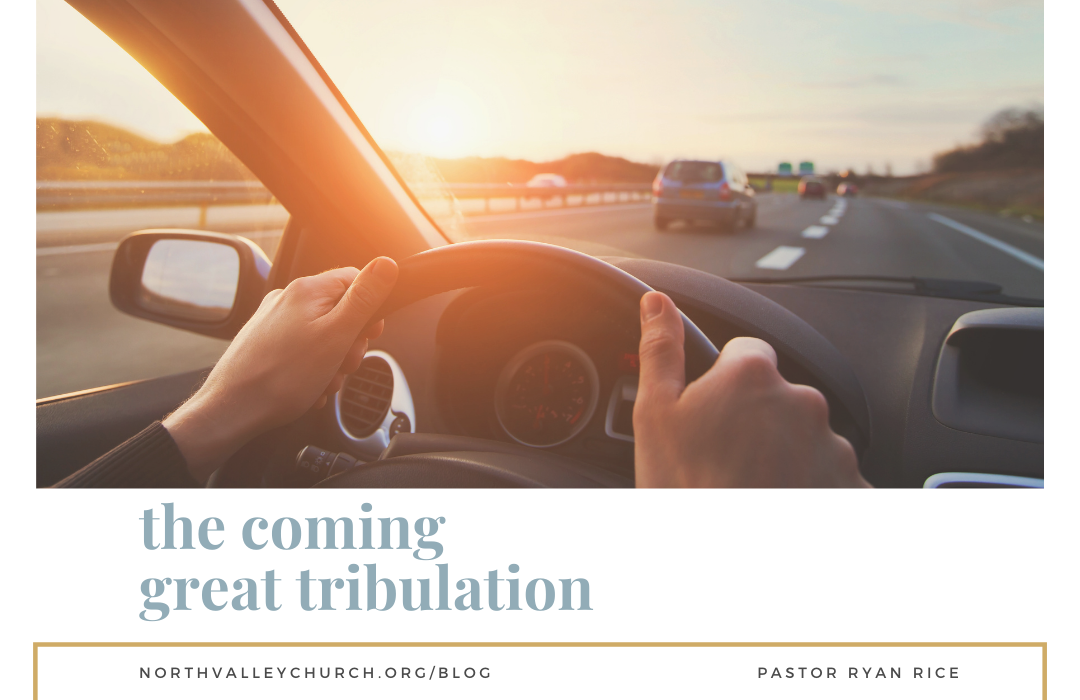 For then there will be great tribulation, such as has not been from the beginning of the world until now, no, and never will be.

At the time of this writing, my son is 15 years old. He’s learning to drive. He’s got his permit and he has been working for months to save up for his first vehicle.  One day after work, I was thinking to ask him if he’d like to drive home. I was hesitant to make the offer because it’s a nice truck and he’s a new driver. Despite my concern, I knew he really wanted to and needed some experience.  So I approached the truck and I saw that he was already in the front passenger seat. I opened the door and said. “Do you want to drive?” He smiled and said, “Yes, of course!” I laughed and with a grin on my face said “Well good. You drive I will ride. But, then my tone changed and said..,  “Remember… if you wreck it… you’ll likely have to endure the tribulation of your father. So be careful.” We both laughed. I am not sure who was more nervous? Me or him? He got the point, and I warned him and we headed home without a scratch or ding!

Jesus warned his disciples too.  He warned them about this coming tribulation that would come upon the earth. This tribulation will come as the result of divine judgment. It will be the consequence of rejecting Jesus Christ as Lord and Savior.  The warning signals have all gone off, the alarms have already been sounded. The ministers, messengers, pastors, prophets, and priests have all urged people for thousands of years to get right with God. The time is near. God could come back at any time to rapture believers and then the tribulation age will begin.

This future event will set a historical death and destruction record like never seen before. The world will seem to fall apart. (Matthew 24:21) Evil will be unleashed and yet, God’s promise is to keep believers from this great tribulation. (Revelation 3:10)

TWO THINGS TO KNOW ABOUT THE TRIBULATION

First, God’s Word tells us that this will be a worldwide event. Jesus said that it would come upon the “whole world.” (Revelation 3:10). This is not a localized event or a national event but a global event! The world will be void of believers on that day. In a moment millions of Christians will vanish via the rapture! Chaos will ensue. Businesses all around the world will instantly lose employees, family members will disappear, friends will go missing at the rapture. God’s rescue operation will be a good thing for all believers, but a terrifying experience for all those left behind as the Great Tribulation begins after the rapture.

Imagine what this would be like. Of the 330 million people that live in the United States of America, it’s amazing to think that roughly half of them claim to be “born again” Christians.  That means literally that there are some 150 million people in our country that say they are Christians! This would include all protestant mainline denominations, non-denominational churches, Catholics, and other Christian groups.  This would as well, even include Mormons, Jehovah's Witnesses, Christian Scientists,  and all sorts of other strange religious branches that try to associate themselves with a Christian name.

So let’s just say if 150 million people say they are Christians. Let’s say only half of them are actually true believers! These would be people that really love Jesus, they believe in the Bible and hopefully attend church! Now we are down to 75 million people in our country that are actually true real Christians. That means there would be according to these estimates some 75 million people that are great candidates for the rapture. This event according to scripture will happen in the blink of an eye. Think about how that will impact our country.

In a moment's notice, 75 million people will be missing from the planet. Businesses will spin out of control, hospitals will shut down. Financial markets will plummet, business deals will fall apart, farmers will have to shut down, delivery drivers will disappear, churches will be emptied of all the real Christians on that day of the rapture. Believers in all industries will leave our world in an instant. The agricultural, e military, the medical, financial, governmental, and educational institutions will shut down overnight and the whole world will be left in confusion.

Second, the world will be terrified like never before. The Apostle John captured this terror in the Bible.

Then everyone—the kings of the earth, the rulers, the generals, the wealthy, the powerful, and every slave and free person—all hid themselves in the caves and among the rocks of the mountains. 16 And they cried to the mountains and the rocks, “Fall on us and hide us from the face of the one who sits on the throne and from the wrath of the Lamb. 17 For the great day of their wrath has come, and who is able to survive?” (Revelation 6:15–17, NLT)

While people have been fearful that God’s judgment is already being poured out and have taken precautions by going into hiding. Thus is described as a global event. kings, princes, presidents, poor and rich will all go into hiding. The suffering will be so great that many will die by suicide and most all will wish they were dead. God’s judgment will be poured out like never seen before. Jesus said…

For then there will be great tribulation, such as has not been from the beginning of the world until now, no, and never will be. 22 And if those days had not been cut short, no human being would be saved. But for the sake of the elect, those days will be cut short. (Matthew 24:21–22, ESV)

These will be dark and twisted times. The absence of God’s people on earth will unleash a new level of demonic, dark, and evil practices and people like never seen before. People will faint from fear, just thinking about what is coming upon the world. (Luke 21:26)

If God’s Judgment is going to pour out on the earth at the time of the tribulation against all unbelievers what do you think you should be doing now for your friends and family that don’t know Christ? Don’t delay go and share your faith! Make contact with them and begin witnessing to them about your faith in Jesus.