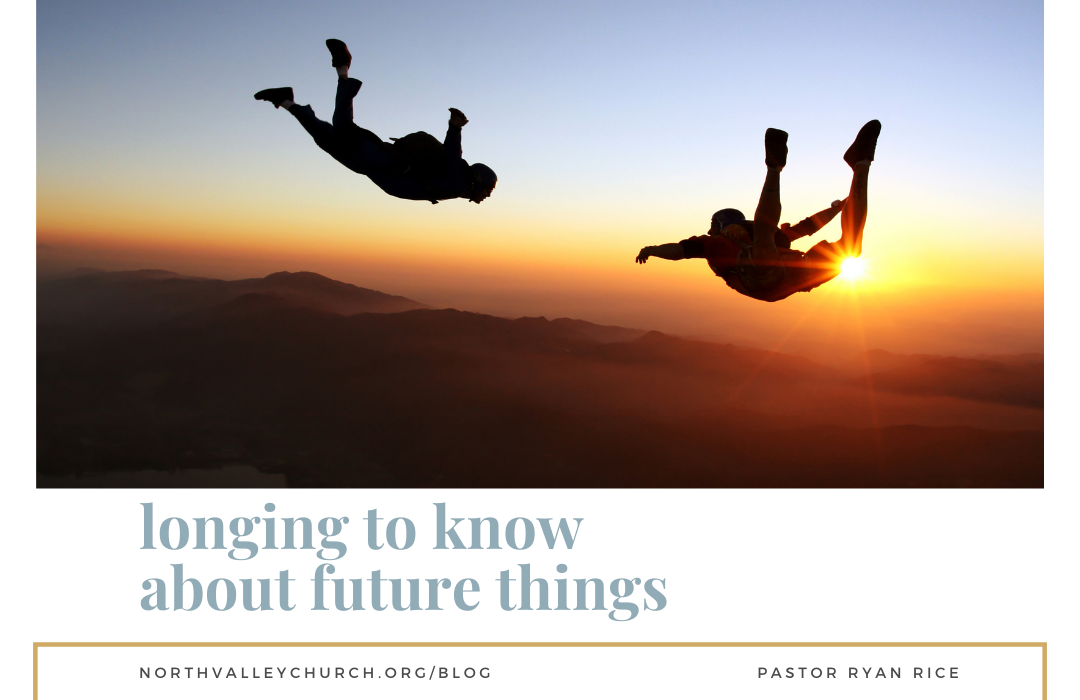 But in these last days, he has spoken to us by his Son…

It was early in the morning. The truck was already packed. Everything had a spot. The tent, the gear, the food, the reels, the rods. We were ready! We were headed to the White Mountains for a fishing trip! On a normal morning, it’s a miracle to get the kids out of bed. But not today. Today was easy. I just had to whisper. “Are You ready to go?” My daughter quickly unfolded the covers  and she’s fully dressed!  Her eyes are wide open and she tries with her best anti-tired voice, “Yup, I’m already to go Dad!” We jump in the truck, and the questions start. How long is the drive? Are we going to stop soon? What are we going to do? What are we going to see? Around every corner, around every turn, with every mile, there was a barrage of questions and curiosity that consumed our conversations. There was a longing to know what was ahead, what the next few days held.

In today’s times, there is a curiosity as well for what’s next, what the future holds. We all long to know what’s around the corner of life. We want to know.  God’s word says eternity was set in our hearts. We are born with an innate desire to know. (Ecclesiastes 3:11). Psychics, fortune tellers, and palm readers all make their money by meeting these desires.  As a Christian is there a way we can see the future? What’s the Bible really have to say about this?

Some believe in the next two months! We are living in an all-time high when it comes to interest in the end time events. People have never been so focused on the future. Plans are made based on what people believe will happen, markets rise and fall. Deals are made and broken based on what people anticipate in the future.  Does the Bible offer a road map for what will happen in future world events?

Many people are obsessed with knowing what’s next. Especially in churches. While I am definitely interested in knowing what God’s word says about Living in the Last Days, I am not obsessed. But I’ve discovered a funny guide to help you assess if you are obsessed.

THE TOP TEN TEST TO SEE IF YOU ARE OBSESSED

1. You always leave the top down on your convertible in case the rapture happens.

5. You refuse a tax refund check because the amount comes to $666.

6. You can name more signs of the times than you can commandments.

7. You believe that there is an original Greek and Hebrew text with Scofield’s notes.

8. You believe the term “Church Fathers” refers to Hal Lindsey and Tim LaHaye.

9. You get goosebumps when you hear a trumpet.

10. You use the Left Behind books as devotional reading.

While we don’t need to be obsessed with prophecy and end time events. We do need to know how to live in light of God’s word. And much of God’s word is prophetic literature. Nearly 1/3 of all of the Bible is prophetic. While there are hundreds and hundreds of prophecies that have already been fulfilled, such as the birth of Jesus Christ, the location of his birth, his death, and resurrection were as well prophetic predictions made not to scare but prepare.

WHAT ARE THE LAST DAYS?

In the New Testament, the term “last days” most often refers to the time period that began with Christ first coming, and will end at the rapture.  As one scholar noted:

“Last Days. An expression used in Scripture to describe the final period of the world as we now know it. In the OT the last days are anticipated as the age of messianic fulfillment (see Is 2:2; Mi 4:1), and the NT writers regard themselves as living in the last days, the era of the gospel. (Baker Encyclopedia of the Bible)

Jesus promised that he would return one day, and no one knows the day nor the hour. (Matthew 24:36)  The Apostle Peter said in AD 60 that “The End is near!” All the apostles seemed to live with a heightened awareness that Christ could return at any moment.

If Jesus was to return today would you be ready to go? Start living like today is your last! Like Tim McGraw said in his country song, “Live Like You Were Dying!” Write a letter to yourself. Write as if you were able to warn yourself a few days before Jesus was about to return. What would you tell yourself to do? What are the last things you would do or say before your time on this earth was done?