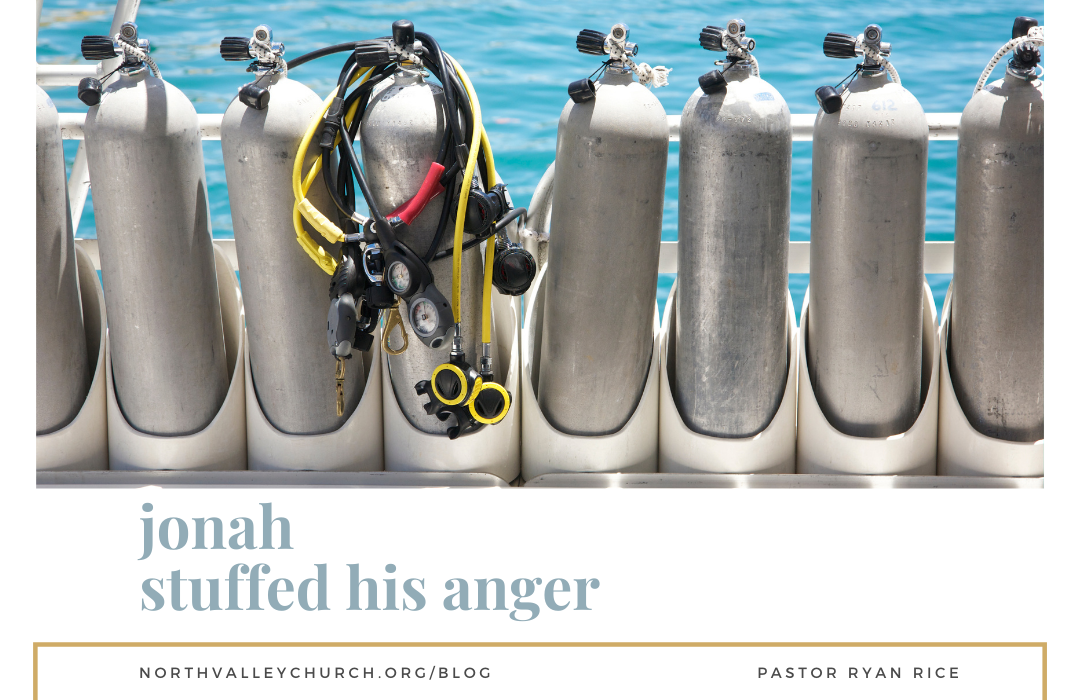 But it displeased Jonah exceedingly, and he was angry. And he prayed to the Lord and said, "O Lord, is not this what I said when I was yet in my country? That is why I made haste to flee to Tarshish.

Recently I heard the story of a man who scuba dived on a regular basis. He had stored his tanks in a trunk for weeks. As the hot summer heated up, so did the tanks. In fact, the temperature rose to more than 130 degrees in his trunk, and they exploded, sending shrapnel through the vehicle and severely damaging the man and the other passengers in the car. Sadly, too many people are like those air tanks, they get stuffed into some difficult circumstance in life that gets them all heated up, and over time... they explode! They not only hurt themselves but others around them too. These are people that never learned to cool down and chill out. They stuff their anger until the pressure builds, and they sit like a bomb waiting to explode!

As we look back on the story of Jonah, we should remember that in chapter one, Jonah ran from the word of the Lord. In chapter two, Jonah repents in the belly of the whale, with poetic prayer!  In chapter three, Jonah returns to his prophetic calling, and in chapter four, Jonah explodes with rage!

First, he's confused about who God is. As Jonah saw God, save guilty sinners, the Ninevites, the scripture says that it "displeased Jonah exceedingly" Displease usually means that one is annoyed, irritated, offended, or peeved. But in the Hebrew language, the word is much stronger. Displease means to indicates one is inflicting evil, seeking harm, or working wickedness!  In these terms, we see that Jonah has blinded himself in his anger and doesn't see God clearly for who he is. God is not evil, God is not seeking harm, God is not wicked.  God is good, and Jonah will say that in vs. 2-3, but yet he's likely concerned that God has rejected the Israelites. He's thinking that God is working to cause evil by preserving their enemies. Jonah's concern is that the Ninevites will conquer them if they are blessed or protected. Jonah's strong displeasure appears to imply that God is the creator of chaos, and working wickedness against Jonah by saving Nineveh.

Second, he has been nursing bitterness. You can see how he's held on to this grudge for some time. In his statement. "O Lord, is not this what I said when I was yet in my country?" I think of how bitterness is like a baby. If it's nursed, it grows into an ugly augur that trolls around and eats the individual from the inside out.  The Apostle Paul describes bitterness, and it's demonic effect on people's lives in his letter to the church in Ephesus. (Ephesians 4:31-32)  Jonah has got some unresolved conflict with God. Some problems from his past and it's created a wicked baby of bitterness.

Jonah is a committed believer. He's what we would call a committed Christian in our church today. Yet, he struggles with some anger issues. In order to get healed from his hurt, he needs to deal with it. What we see in chapter four is that he has not.

Are you dealing with your anger? Are you a stuffer? Do you run or hide?  Have you been nursing a grudge too long? Be careful, or you could blow up! Go to the Lord in prayer and start dealing with it now.