If You Love the Bible… You Will Love Prophecy! 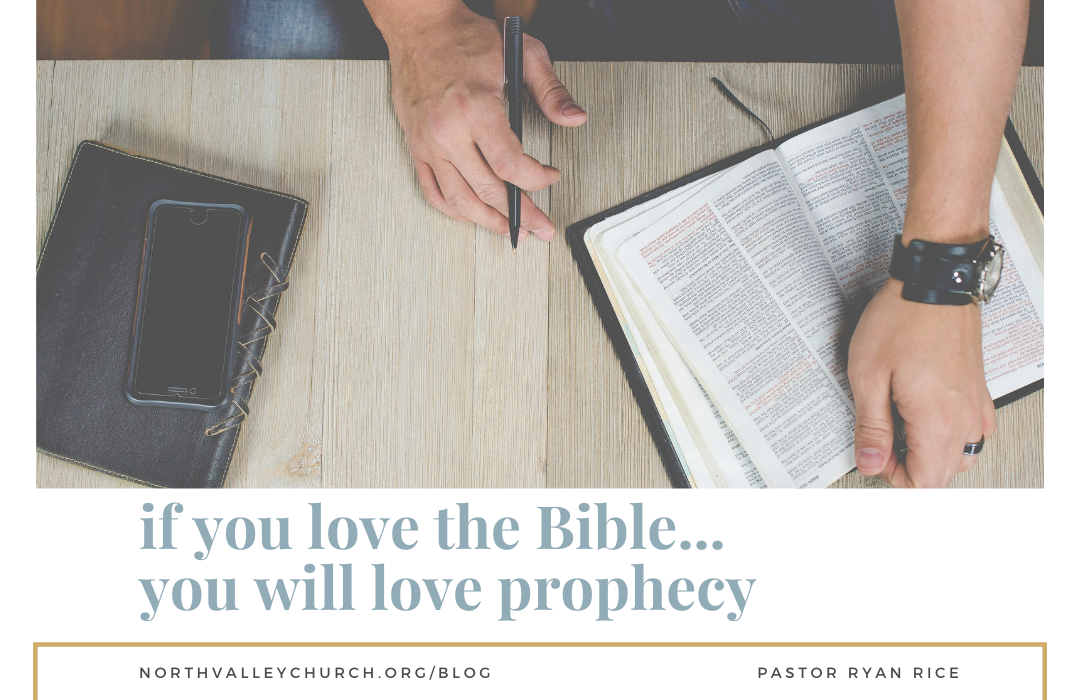 Blessed is the one who reads aloud the words of this prophecy, and blessed are those who hear, and who keep what is written in it, for the time is near.

Some people would argue it’s too confusing,  or that there are too many opinions on the subject and too controversial to teach on. But like any other theological category in the Bible we ought to pay close attention to it and seek to educate ourselves should we not?

When you here the word Revelation, you likely think of the last book in the Bible or end times images flood your mind. But have you ever thought what the word meant? The Oxford dictionary defines it as… “a surprising and previously unknown fact, especially one that is made known in a dramatic way.” Should we not want to make known what was previously unknown known about God’s promises for the future?  We should! There are many more reasons as to why we should study prophecy, but here are two more.

#1 THE BIBLE IS A BOOK ABOUT PROPHECY

I’ve heard some people object to paying much attention to futuristic prophecies, arguing that we need to remain grounded not keep our head in the clouds. Yet it’s interesting that Jesus said more than 50 times to be ready for his return! Jesus continually and consistently taught about the future. The early church lived with eager anticipation that Jesus could come back at any moment. Many missed his first coming by not paying close attention to God’s prophecies, therefore in his second coming there has been a growing number of believers that carefully and methodically study these end time events in light of scripture. In every generation there needs to be believers in every church who commit themselves to the study and truth of God’s word, not just one aspect of it but all of it.

PROPHECY IN THE BIBLE

Here are some interesting facts that help us see how prophecy proportionally plays a major role within the subjects of scripture.

Entire books of the Bible are prophetic in nature. From Minor Prophets to major Prophets. The Minor prophets are Hosea, Joel, Amos, Obadiah, Jonah, Micah, Nahum, Habakkuk, Zephaniah, Haggai, Zechariah, and Malachi. The major prophets are Isaiah, Jeremiah, Lamentations, Ezekiel, and Daniel. Not to mention Thessalonians and Revelations in the New Testament.

The Bible is a book about prophecy. In just three chapters we find a prophecy about Jesus (Genesis 3:15) If we love the Bible we ought to love prophecy. It makes up nearly 1/3 of our sacred scriptures.  Nobody preparing for a test would leave 1/3 of the material out to guesswork.  A faithful student will study all the material that’s been covered in class or assigned for reading. So is our assignment with God’s word. We are to take all of scripture as God-breathed. (I Timothy 3:16) not just some of scripture as God-breathed. Or as the Apostle Peter stated, “For no prophecy was ever produced by the will of man, but men spoke from God as they were carried along by the Holy Spirit.” (2 Peter 1:21, ESV)