Five Signs of the Times | #5 A Great Apostasy 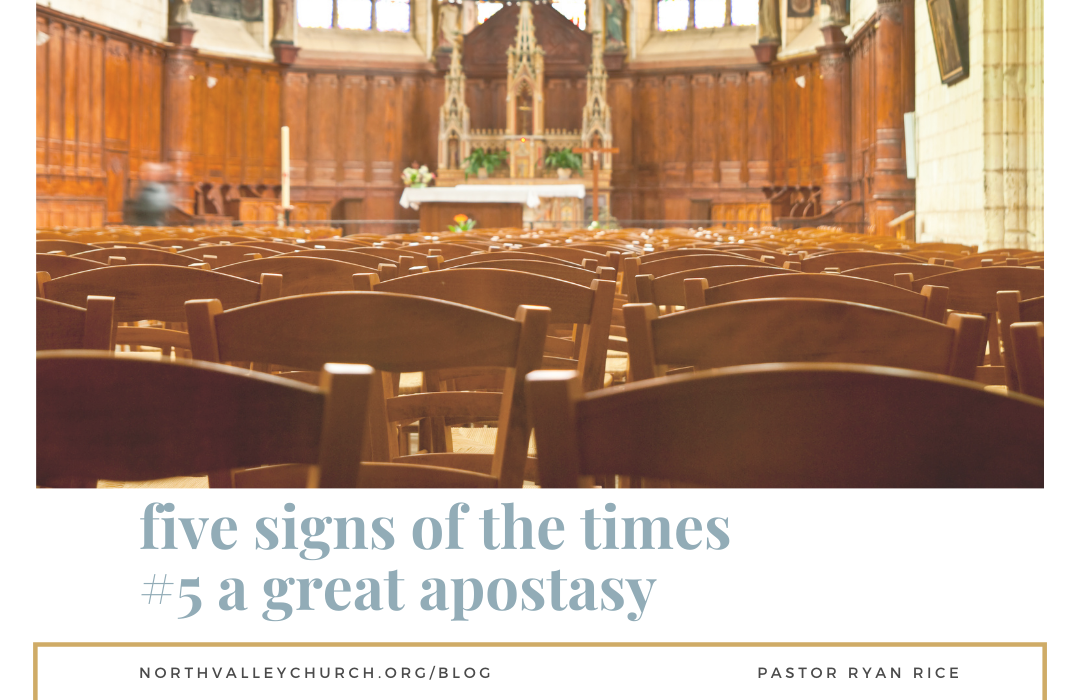 Now concerning the coming of our Lord Jesus Christ and our being gathered together to him, we ask you, brothers, not to be quickly shaken in mind or alarmed, either by a spirit or a spoken word, or a letter seeming to be from us to the effect that the day of the Lord has come. Let no one deceive you in any way. For that day will not come, unless the rebellion comes first…

In Paul’s letter to the church, we find him trying to bring comfort to a group of concerned Christians that have received some bad teaching concerning end time events. They are anxious about facing trials and tribulations. He urges them not to be quickly shaken or alarmed but to understand the order of events. There apparently was someone who had deceived them. Here we find Paul straightening out these new believers' misconceptions.

Dr. Constable from Dallas Seminary notes the following about their rebellion or falling away.

“the falling away,” hē apostasia, from whence comes the English word “apostasy”. This is a revolt, a departure, an abandoning of a position once held. This rebellion, which will take place within the professing church, will be a departure from the truth that God has revealed in His Word. True, apostasy has characterized the church almost from its inception, but Paul referred to a specific distinguishable apostasy that will come in the future (cf. 1 Tim. 4:1–3; 2 Tim. 3:1–5; 4:3–4; James 5:1–8; 2 Peter 2; 3:3–6; Jude). He had already told his readers about it (2 Thes. 2:5).

This rebellion is a great falling away whereby the church is persecuted from within. Church members fight, sue one another, hate and hurt one another as well. Believers backslide. Many leave the church altogether.

During this global pandemic, we are currently in, it’s been reported that roughly 30% of Christians have left the church altogether. They quit watching online, they quit going, they quit giving, they quit. Many watched for a while, some went out and shopped, other hopped and finally dropped out!

Preceding the rapture. As we study the scriptures we see that there will be a growing number of those that leave the church. Morally and doctrinally abandon the truth of God’s word. “Now the Spirit expressly says that in later times some will depart from the faith by devoting themselves to deceitful spirits and teachings of demons.” 1 Timothy 4:1

The Apostle Paul warns about this apostasy again…

But understand this, that in the last days there will come times of difficulty. 2 For people will be lovers of self, lovers of money, proud, arrogant, abusive, disobedient to their parents, ungrateful, unholy, 3 heartless, unappeasable, slanderous, without self-control, brutal, not loving good, 4 treacherous, reckless, swollen with conceit, lovers of pleasure rather than lovers of God, 5 having the appearance of godliness, but denying its power. Avoid such people.  (2 Timothy 3:1–6).

This description sounds too current to our own culture. The signs are revealing themselves that the time is near. The rapture could occur at any moment. While God could send forth a great revival prior to the rapture, Biblical passages such as 1-2 Timothy and 2 Thessalonians don’t indicate such an idea.

“Some think we can look for a worldwide spiritual awakening before the Rapture, but the passage in 2 Thessalonians indicates the opposite; a worldwide departure from the faith can be expected. God might indeed send a revival before the Rapture but the Scriptures do not prophesy one. This age will close will a great falling away.”

Therefore, it should be of no great surprise to see a surge of believers leave the faith. Abandon previously held doctrines such as the authority of scripture, and even the deity of Jesus Christ; yet still call themselves Christians. Perhaps this is what Jesus referred to when he said that many would come to him, in that day and he would tell them that he never knew them. (Matthew 7:22)

What we see in today’s times is the slow fade of biblical truth and Christian ethics. In an effort to avoid being extreme or politically incorrect, many have ignored the foundational truths of scriptures and traded to be culturally relevant. Too many have sought to offer love, without truth.

In too many churches there is an offer of Christianity without a cross, a revival but no repentance. A confession but no real conversion, heaven without a hell.  This is not true Christianity, this is a form of cultural religion that is dead and worthless. It’s nothing more than better behaved moral people, that adhere to the practices and principles of Biblical teaching as long as it’s not too offensive, or as long as it’s helpful. But the moment the truth offends or insults one’s personal belief, it’s disregarded and ignored. Perhaps this is what God will do with all those on that final day. (Matthew 7:21–23 Let’s look more closely at Jesus' words.

Examine yourselves, to see whether you are in the faith. Test yourselves. (2 Corinthians 13:5) Pray to God and examine your life? Are you truly a Christian? If you are unsure go talk with another strong Christian friend or a pastor. Go to the Lord now and dedicate your life to him. Admit your sin. (Romans 3:23) Believe in Jesus to forgive your sin.  (Romans 5:8) Confess him as Lord. (Romans 10:9) Text NVyes to 94090 and we will help you get going in your journey.